Our dining is on a first come, first served basis. However, if you have a large party, are planning an event, or need catering services, drop us a line and we'll hook you up.

Thank you for contacting us! If needed, you will hear back within 48-72 hours.

We're located in the heart of old town. Centrally located, you can easily get to us from any area in the valley. Here's a map, but if you get lost, just give us a call and we'll tell you how to get here.

The Owner, Tony K., grew up on his families olive tree farm in Plutohori, Greece. At age fifteen he was sent to the United States to work for his uncles restaurant. Working from the ground up he spent three years on three jobs and saving his money. At age eighteen he opened his first restaurant. It was so successful he branched out and in 1997 opened TK'S. His passion for food shows through his dedication and the portions are testament to early days of food, family & friends.

In 2015 much was discovered about the history of the building itself. The original log structure was built in approximately 1800. After a fire destroyed it a store raising took place in 1815. Andy Collins, a member of the construction team, christened the building with a bottle of rum and declared, "From this day forth this place shall be known as Rum Corner."  Since that time she has had many uses including the town school, post office, voting registry, town hall, fire company, car dealer/garage, hotel/restaurant and its said to have played part in the underground railroad. In all that time she has had surprisingly few owners with Tony only being the sixth. 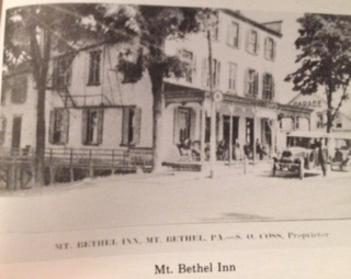